Stimulus: What are America's Options? 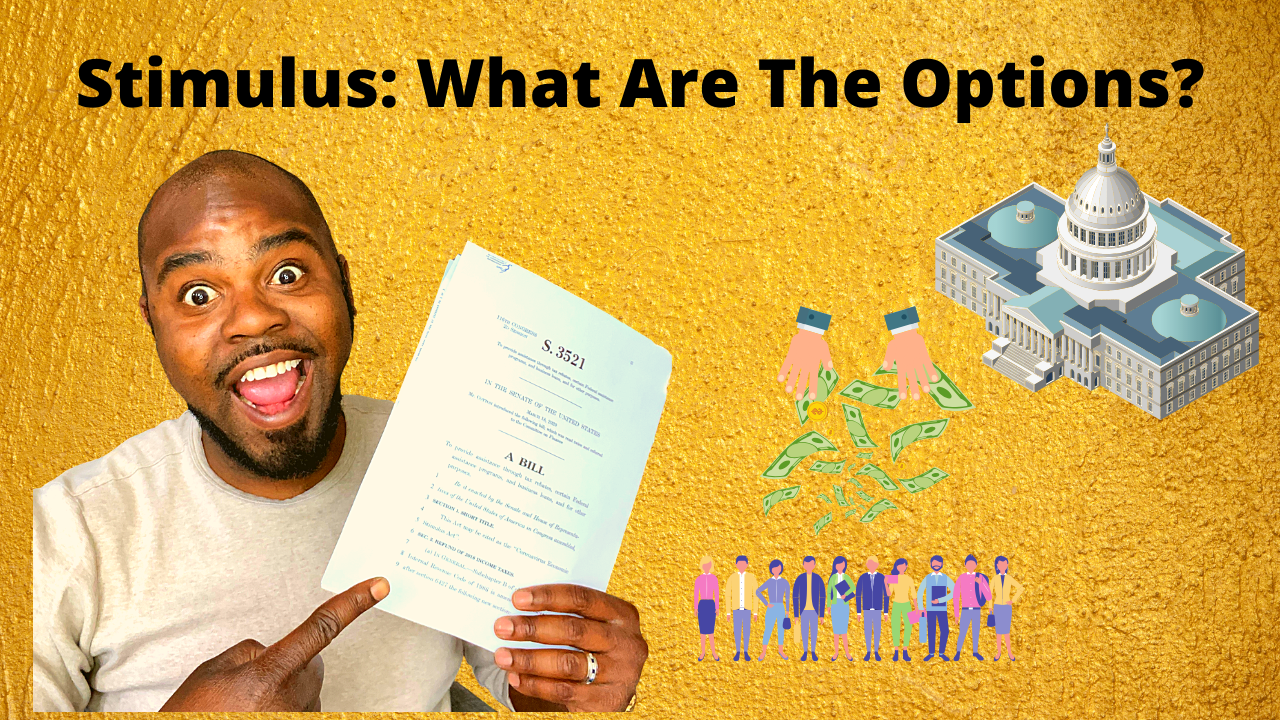 As the country gradually reopens, there are still millions of Americans that are suffering. And, at times, it’s really unclear what the Government will do and what relief, if any, will be provided to American citizens. The reality is that a decision is likely weeks away considering the array of options. A word of advice file your federal taxes and make sure your information, like banking is listed, so you’ll be able to receive direct deposit of whatever comes does the pike that you’re entitled to. The IRS extended the tax filing deadline to July 15th from April 15th so don’t dally, there’s time.

There’s certainly no shortage of ideas and options floating around Congress, but the question is, of the multiple options that the federal government has, what are the next steps?

The start of the pandemic has seen the U.S government spend over $2.2 trillion in relief assistance to citizens and business small and large. With the money allocated many middle- to low- income households received up to $1,200 per adult. Even that doesn’t seem to be enough, WalletHub surveyed American sentiment and found that 84 percent of American want another wave of stimulus checks. Although anecdotal evidence suggest that the distribution of funds was weighted heavily in favor of non-minority businesses.

More than 40 million people have filled for unemployment since the start of COVID-19 with 22 million jobs being wiped out. And while many Americans are still working, there is a class of people that are working but doing so for less money.

All of these factors lead us closer toward the reality of another round of stimulus payment. In fact, some in Congress have pushed for $450 a week in what is being characterized as a “work bonus”. Separately, there are others in Congress that want to extend the $600 per week in unemployment benefits.

Let’s go through the options on the table. Keep in mind that a bill is typically many pages and includes lots of provisions. Plus, everything we’re discussing has not been finalized yet. What I am discussion are the conversations/proposed bills that are being considered. Which means, one of these or some version of them will be adopted, agreed upon and passed into law. Then again, nothing could get pass and we’ve all seen Congress where they’ve nothing at all. Here’s the proposals on the table:

The House of Representatives have passed a $3 trillion bill that would include another round of $1,200 stimulus checks for individuals and $2,400 per married couple. It would also extend federal unemployment benefits through the end of January 2021. It would bump up the $500 allowance for kids, up to three (3), to $1,200 a piece. If you’re doing the math, this means that families could receive as much as $6,000. Of course, there are eligibility requirements, such as income that’s based on your 2018 and 2019 tax returns. Here’s the ranges for the singles:

o   Couples that filed jointly above $198,000 would not be eligible

Do you think that this approach targets those that need the money the most? Should there be some provision that requires recipients to bring certain expenses current, like rent payment? I would be interested to hear from you because that’s exactly whom these laws will impact; let’s chat.

The Back to Work Bonus

There are more options on the table than there have ever been before to help American’s citizens survive the unknown waters that Covid-19 has ushered us all into. As Congress debate and the way forward become more clear, I'll be reporting back and breaking down what's developing. Also, be sure to subscribe to my YouTube Channel for updates as well.

Brandon Scott is a licensed real estate agent in Washington, DC, Maryland and Virginia. His license hangs with Coldwell Banker Dupont-Logan, DC. He’s been involved in the mortgage finance industry for the last 16 years in various fields. You can reach him by email at Brandon@bmscott.com. Subscribe to his YouTube Channel at RealTea DMV